Home » What Does it Mean When the Insurance Company Only Accepts a Percentage of Fault?

What Does it Mean When the Insurance Company Only Accepts a Percentage of Fault?
FREE CONSULTATION 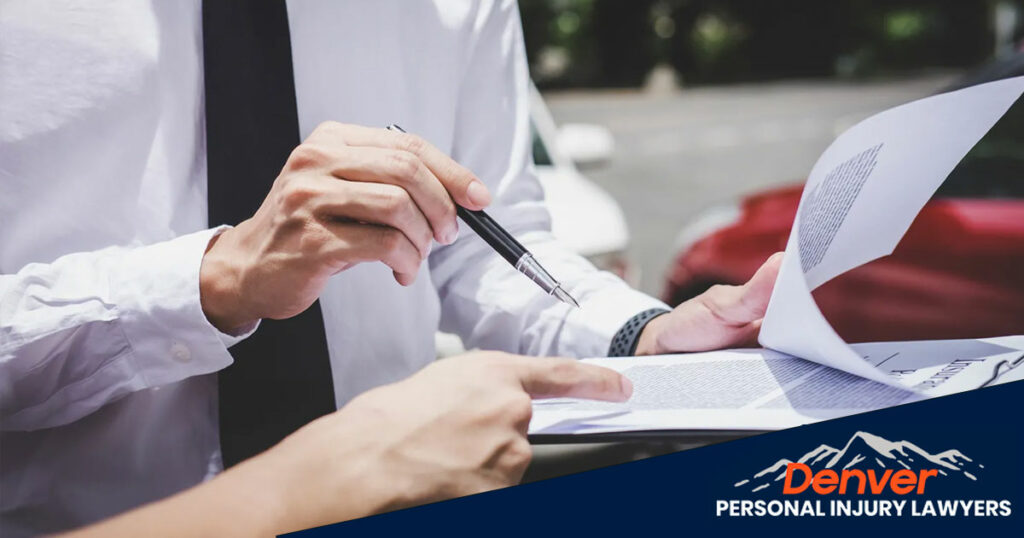 What Does it Mean When the Insurance Company Only Accepts a Percentage of Fault?

Car insurance companies use comparative negligence to assign fault after a car accident.

Colorado follows modified comparative negligence laws. After a car accident in Colorado, both insurance companies will review the details to determine how much fault each driver might have in the accident. Therefore, one driver may not be entirely “at-fault.” Instead, the liability is shared between drivers according to the accident circumstances.

How Do Insurance Companies Determine Fault?

Insurance companies review the details of accidents. They conduct thorough investigations of the accident scene and collect statements from witnesses and involved parties. They may also review police reports and take note of any local traffic laws (like speed limits). Finally, they will consider whether any road conditions or structures played a role in causing the collision. After reviewing the accident, an insurance adjuster will assign liability to each driver involved in the crash.

Negligence Laws in Your State

Under Colorado law, negligence occurs when a person fails to act with reasonable caution. If their lack of reasonable care causes another person’s injury, the victim can sue the negligent party for financial compensation.

Car accidents are often not the fault of only one driver. As a result, an insurer may assign a percentage of fault to each party. They will investigate the accident details and assign faults accordingly.

For example, imagine that you suddenly switch lanes, and then a speeding car rear-ends you. The insurance companies might determine that you are both negligent or partially at fault. They might assign 60 percent of the fault to the other driver and 40 percent to you.

Then, your percentage of negligence will affect how and how much you can recover in your claim settlement. Here are the different types of negligence that vary by state:

If you live in a state that uses “pure comparative negligence,” you can recoup accident-related damages from the other driver. How much you recover will depend on the other party’s degree of responsibility.

For example, if the other driver is 80% at fault, their insurance company might pay for 80% of your medical expenses, car repair, and other damages. Your insurance provider would cover the other 20%. The states that use pure comparative negligence are Alaska, Arizona, California, Kentucky, Florida, Louisiana, Mississippi, Missouri, New Mexico, New York, Rhode Island, and Washington.

Colorado and most US states use modified comparative negligence (32 other states, specifically). In these states, you can still recover damages from the other party based on a percentage of fault. However, there are some restrictions.

In Colorado and other states that use modified comparative negligence, you can’t recover damages from the other driver if you’re more than 50% at fault for the accident. Therefore, if you are more than 50% responsible for causing the accident, you will pay for your damages, even if the other party was at fault.

States that use contributory negligence don’t allow you to recover expenses if you are found to have any responsibility for causing the accident. So even if you only contributed 5% to cause the accident, you still may not seek recovery from the other party’s insurance. Alabama, the District of Columbia, Maryland, North Carolina, South Dakota, and Virginia use pure negligence laws.

How Is Modified Comparative Negligence Enforced in Colorado?

Modified comparative negligence calls for insurance companies to make the final decision about who is at fault. A driver could assume a portion of the fault for many reasons in the eyes of insurance companies. Even if one driver has more fault, the other can still be partially at fault.

Distracted driving and failure to follow traffic laws are the most common reasons for a driver to be found partially at fault for an accident. In addition, liability is not limited to who caused the accident. For example, let’s say a driver does not necessarily cause the accident but could have done something to prevent it. They might be partially liable if they fail to do something within their power to prevent the accident.

For instance, imagine a driver speeding through a green traffic light. If that car hits another car turning at the intersection, they might be partially at fault. The turning driver is a fault for not yielding to the car that had the right of way. As a result, the driver that turned and hit the right of way driver might be found to be 80% liable for the accident.

Even though the speeding driver with the right of way had a green light, they were still speeding. Therefore, since they could not stop in time to prevent a crash, they might be found 20% liable in this example. If the driver with the right of way wanted to take legal action against the driver who failed to yield, they could recover damages. The right-of-way driver would recover the total award amount in the case. Under comparative negligence laws, you can recover damages if the other party is over 50% at fault. However, the jury could still reduce your award amount by your percentage of fault.

Can I Still Collect Damages if I Had More Fault in the Accident?

No. If you are primarily at fault for the car accident, you cannot collect money from the other party’s insurance company.

Can I Dispute the Insurance Company’s Decision?

The only way to dispute the insurance company’s decision is to let a jury decide. If you do not agree with the percentage of fault apportioned to you, your remedy is to file a lawsuit.

Since we offer free consultations, you have a no-risk opportunity for a professional legal case review. Contact us today or call 720-500-HURT.