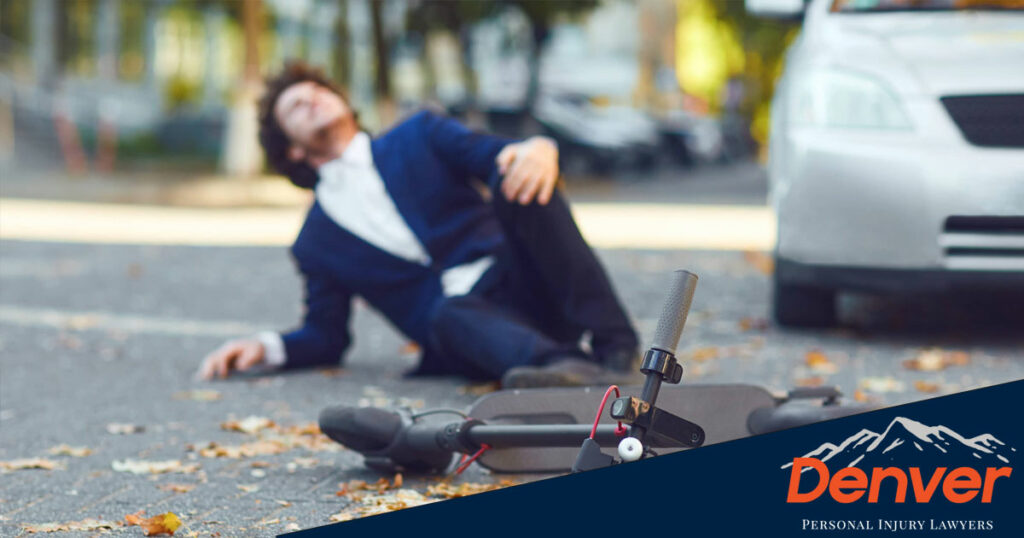 If you’ve been injured on a scooter, our Broomfield Electric Scooter Accident Attorney can help you receive the compensation you deserve.

At Broomfield Personal Injury Lawyers, we’re familiar with the relatively new Broomfield electric scooter laws and can help you get the money you deserve to recover as best possible.

Electric scooters are rapidly growing in popularity in Broomfield. Provided by companies such as Bird and Lime, they’ve opened up a new form of transportation. But with that comes inherent risk.

Just like driving a car, there are laws that electric scooter operators must follow in Broomfield. If you’ve been injured because someone ignored these laws, then you likely deserve financial compensation for your damages.

Whether you were operating the scooter, riding a bike, driving a car or out walking – we can help.

Our Broomfield electric scooter accident attorneys can prepare a claim with a combination of impressive legal expertise and resources. We don’t give in to the tricks and bullying from insurance companies and will fight for the money you deserve.

Although electric scooters give a great sense of freedom, they can be extremely dangerous. We’ve seen incidents such as:

Ignorance of Broomfield’s electric scooter laws has been a common cause of accidents in recent years.

What is an Electric Scooter?

Colorado defines an electric scooter as:

Electric scooters are regulated in Colorado under the same conditions as electric bikes:

Note that before 2019, electric scooters were regulated as ‘toy vehicles.’ That was until a bill was introduced, regulating them the same as ‘electric bikes.’

Who Is Liable in an Electric Scooter Accident?

Another example could be a distracted car driver failing to yield and hitting you while you ride an electric scooter. In that case, the car driver would be liable.

Even manufacturers have been found liable. Such as in 2019 when Lime was sued by users who were suddenly and violently thrown off the scooters due to a brake fault.

Depending on the circumstances, the individual or their insurance company may have to pay a victim for the damages suffered.

Just like any other personal injury claim, proving negligence is an essential step. In Colorado, both parties are examined for their involvement in the accident. The judge will then determine the relative fault of each party. The percentage of that will then reduce the amount of compensation you’re entitled to.

To prove negligence in a Broomfield electric scooter accident, you must prove:

Our Broomfield electric scooter accident attorneys can investigate your accident to determine the cause, before preparing a robust case that will give you the best chance at receiving the financial compensation you deserve.

Colorado’s Statute of Limitations limits the time you have to file a personal injury claim to two years from the date of injury. It’s advised that you contact a Broomfield electric scooter accident attorney as soon as possible to avoid the risk of missing this deadline. (§13-80-102 and §13-80-101).

As riding a scooter, bike or walking is an unprotected activity, these accidents can result in severe injuries. Our Broomfield electric scooter accident attorneys have worked on collisions resulting in:

What Damages Could I Win in an Electric Scooter Accident Claim in Broomfield?

With a combination of a proven track record, impressive financial resources, esteemed legal reputation and a compassionate approach, we believe there is no better team than Denver Personal Injury Lawyers.